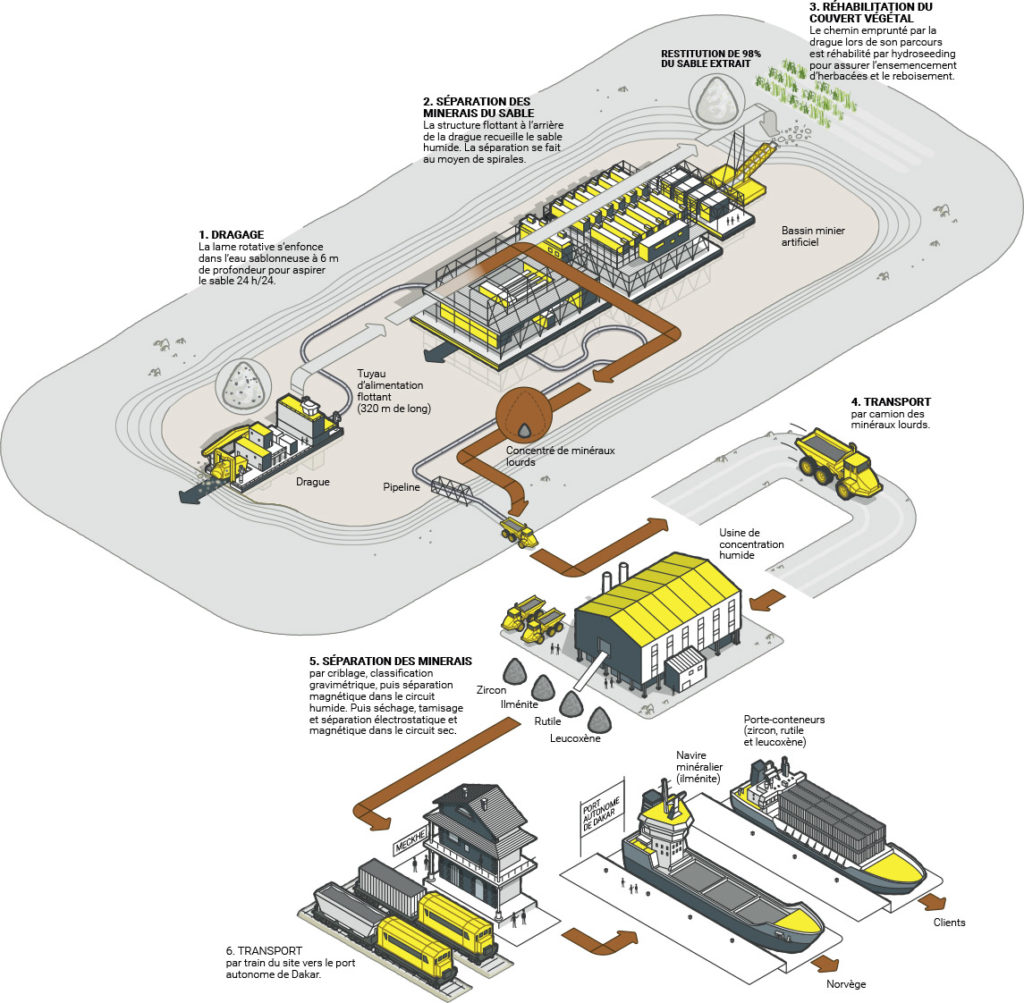 GCO extracts the sand from a stretch of dunes along the Atlantic coast, within a concession that is 106 km long and around 4 km wide. A dredger operates in an artificial basin in the area where the deposit is located, moving around 7 to 13 kilometers a year.

Measuring 50 meters in length and 16.5 meters in width, the dredger has an extraction capacity of up to 7,000 tons of sand per hour, the largest in the world. It is constantly in operation, moving forward and laterally around the mining basin. The rotating blade mounted on the front of the dredger sinks to a depth of 7 meters under the water, while the ore is sucked up by the main pump, which measures 1.2 meters in diameter.
The decision to use industrial equipment (the dredger and separation plant) much larger than normal was the only solution to make the deposit economical, due to its low mineral sand content.

To keep its facilities running, GCO has 710 direct employees and 820 subcontracted workers, most of whom come from neighboring rural communities.

The positions are highly varied, including miners, environmentalists, IT specialists, and laboratory assistants, as well as electricians, mechanics, and technicians.
There are also some support roles for the workers’ camp (food service, laundry, etc.).

Why do mineral sands exist?

For millions of years, igneous and metamorphic rock in Africa was altered and eroded, while grains of quartz and other minerals (including, rutile, leucoxene, ilmenite, and zircon) were washed out by strong rain and turbulent river water before reaching the sea, where the waves brought them to the beach. The heaviest ones stayed, while the lighter grains of quartz went back out to sea. The repetition of this process over millions of years has created a large deposit of mineral sands on the beach. As the coastline moved further inland, the deposit was burrowed deeper or was stabilized in the form of black dunes.

The stretch of mineral sands in Diogo is low in mineral content (around 1.5%), which is why oversized equipment was chosen to make the deposit economical.

Once extracted, the sand is transferred through an intake hose to the largest Wet Concentration Plant (WCP) in the world, which is located in the same basin.

The sand undergoes a series of physical processes – with no chemical additives – in a floating trommel-type pre-concentrator, hydrocyclones, and spiral concentrators. These operations separate the mineral sands into zircon, ilmenite, leucoxene, and rutile. The lightest sand is discharged as waste at the other end of the basin, where it is used to reshape the landscape as close as possible to its original state.

The heavy mineral concentrate is then transported to the Mineral Separation Plan (MSP), which itself comprises several different units, one for each product: zircon, ilmenite, leucoxene, and rutile. Different operations are performed here at a high temperature, before the products are sifted and electrostatically and magnetically separated.
The industrial site is powered by a 36MW plant in order to keep all of the industrial units up and running.

A socially responsible company, GCO has made water preservation a top priority in order to meet the needs of its industrial facilities and its workers in the camp. To this end, it employs two wastewater treatment plants, one with a biological treatment process and another with a natural treatment process.
Given the risks to public health and the dangers posed by air and groundwater contamination, the Environment Department also educates the local communities about wastewater risks. It also provides them with a water management system, in collaboration with municipal authorities. The retreated wastewater may then be re-used for market-garden crops.

The commercial products are shipped by train to Mékhé Station, where a GCO team handles transport to the Port of Dakar. Every year, around 600,000 tons of ilmenite are transported in hopper cars from the production site to the Senegalese capital, then to our customers around the world. As for the zircon, rutile, and leucoxene, around 100,000 tons are transported in leak-proof containers over the course of one year.

GCO is able to ship its commercial products efficiently using extensive port and storage infrastructure, including a 27-meter-tall warehouse with 9,200 square meters of space used to store ilmenite. Likewise, a 22km section of track was built to connect the MSP to Meckhé Station, itself connected to the railroad line to Dakar, for which GCO was partly granted the concession by the Senegalese government.

From the outset, rail lines were chosen to conduct transport between the MSP and Dakar (with connections in Mékhé, Tivaouane, and Thiès) in order to minimize the risk to local communities. In light of this, an ambitious modernization program was launched to make transportation safer for these communities. 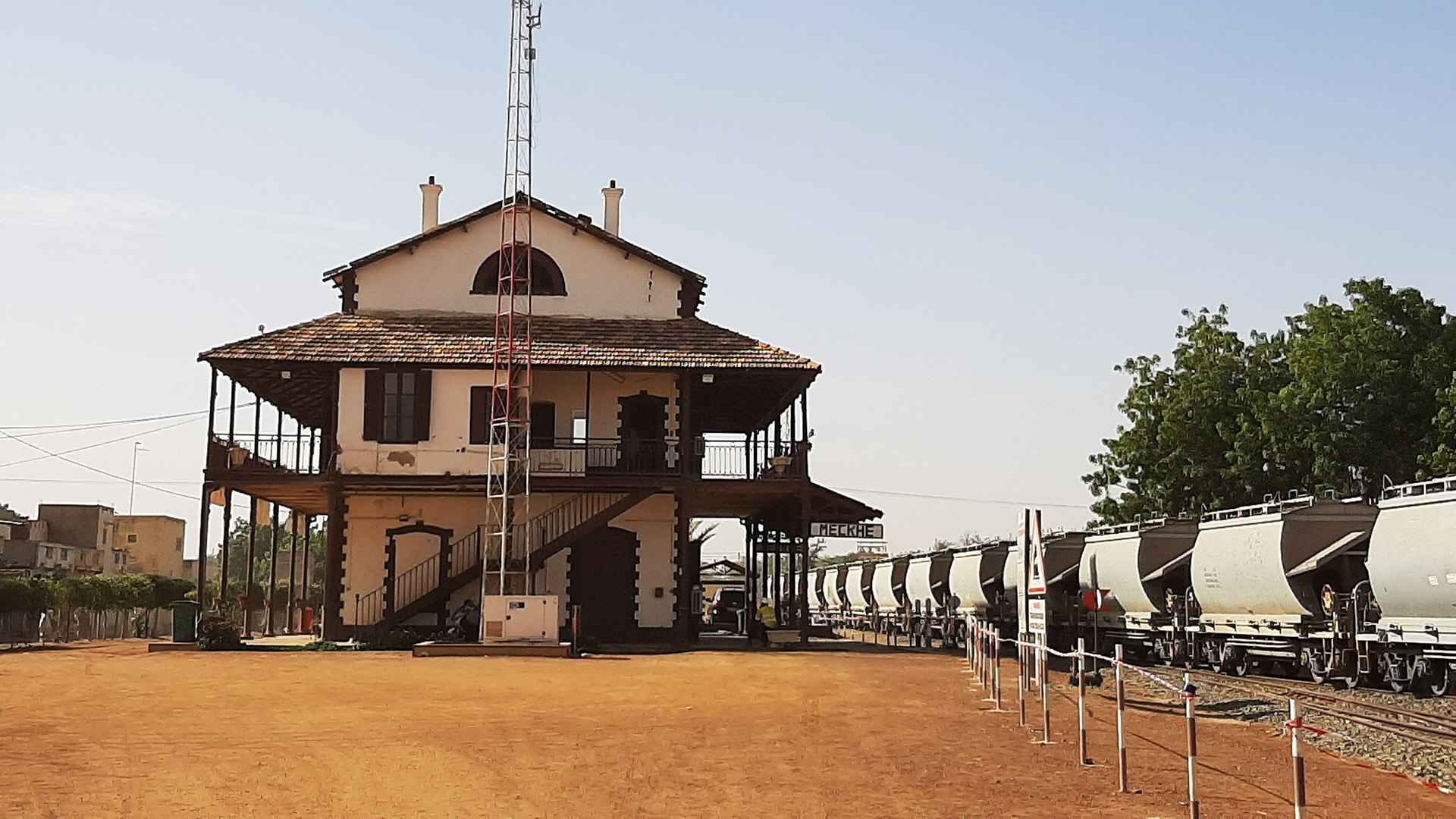